The Stockholm Archipelago is a beautiful area in the Baltic Sea off the coast of Stockholm consisting of thousands of small islands.

The Archipelago Foundation (Skärgårdstiftelsen), founded in 1959, owns and manages approximately 15% of a total area of more than 1000 km2 with the objective of preserving the natural and cultural heritage of the archipelago. 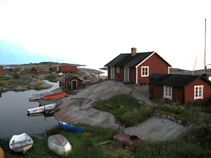 In 2006-2007, as part of an EU-project to improve the toilets on the islands, Clivus Multrum installed more than 40 toilet facilities on islands that can be reached by ferry.

The Susedalen service area along the E6 motorway is situated south of Falkenberg in the Southwest of Sweden and operated by the Swedish Road Administration (Trafikverket). King Charles XVI Gustaf opened it in November of 1996.

Environmental protection was an important consideration for the design of the service area. E.g. surface water from the road is captured in catchment areas to protect the surrounding areas from the pollution by road salt, etc. 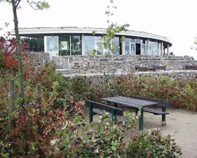 The toilets were built with stainless steel fixtures connected to Clivus Multrum units placed in the basement.

As the service area attracted more visitors than originally estimated, Clivus Multrum re-built the facility in 2003. It is now dimensioned for several hundred visitors a day.

The Bronx Zoo has been educating and entertaining visitors since 1899. The Zoo’s 256 acres makes in the largest urban zoo in the United States. It hosts two million visitors annually and is home to more than four thousand animals. Owned and operated by the Wildlife Conservation Society, the Zoo has a strong focus on environmental conservation. That focus has been applied to an interest in sustainable building practices at the Society’s zoos. 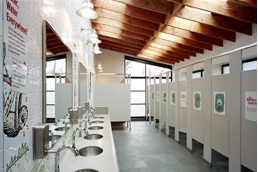 Restrooms near the Bronxdale entrance needed replacement due to a failing septic system. A new septic system at the site was rejected due to concern over the potential for pollution to the nearby Bronx River. A sewer connection was considered but was also abandoned due to the huge cost of tunneling under the Bronx River Parkway.

Instead, the Zoo decided to install a Clivus Multrum Composting Toilet System consisting of 10 composters. In addition to saving money, the Clivus systems capture and recycle the nutrients in human waste and use only minimal water for flushing.

The Eco-Restroom accommodates more than ½ million visitors per year. The 15 foam-flush toilets use only 6oz. of water per use, resulting in a savings of more than one million gallons of water each year, as compared to conventional low-flow (1.6gpf) toilets.

Canoeing in Dalsland and Nordmarken, an area with many lakes and rivers in central Sweden, is a great experience attracting many tourists from Sweden and abroad.

Sanitation around the camp sites was a major challenge as existing facilities could not cope with the volumes, in turn causing pollution of the surrounding areas.

Since the inauguration in 2000, the DANO-area has developed 103 camping-sites with more than 140 operational Clivus Multrum installations.

We are present in the following countries: